Did you know a fine wire mesh is all it takes to prevent dangerous gases from exploding into a massive fire? PopSci's Gray Matter demonstrates an interesting invention of the early 1800's: the Davy miner's safety lamp, a simple solution to the violent coal mine explosions of the time. The apparatus was invented by Humphry Davy, one of the world's first professional scientists. 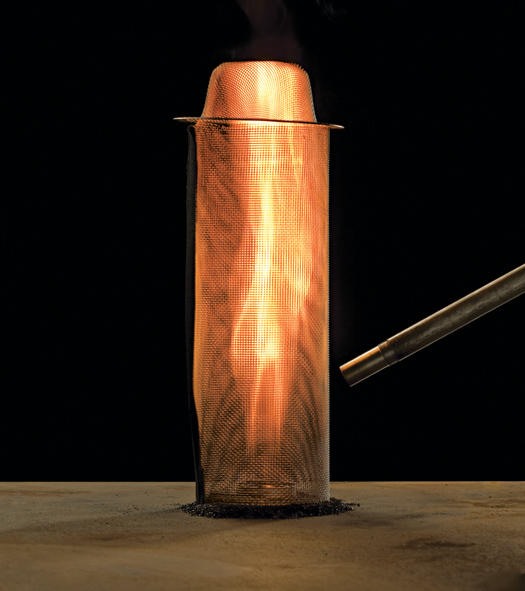 "Davy solved the problem by systematically studying what happened when gases burned. He started with the observation that gas flames would not travel down long, thin metal tubes because the metal draws heat from the flame, lowering the temperature of the gas below the ignition point.

He tried making the tubes thinner and shorter, until he discovered that thin tubes needed to be only about as long as their diameter to prevent fire from traveling their length. The logical end point was fine metal mesh, which you could think of like thousands of very short tubes arranged in a grid.

As bizarre as it sounds, you can blow an explosive mixture of gases through a fine wire mesh toward a candle flame and, when the gas explodes, the fire stops dead at the mesh—this despite the fact that the gas came right through the holes in the mesh and is just as explosive on the outside as it is on the inside."

See it demonstrated below.