Measuring the distance from the Earth to the moon doesn't require NASA equipment. The ancient Greeks did it, which means 2,000 years later, you can do it, too.

"Many people have held up a round object and let it block the Sun. Most of the time, it's not an exact fit. A slice of Sun peeks through, or a little of the surrounding area is blocked out. When a round object is held up in front of the Sun, it creates a cone of darkness that tapers down to one point. At that one point, the object blocks out all of the Sun, and nothing else. That point, on Earth, is 108 times the diameter of the object. A beach ball will create a shadow 108 beach balls long, which at the farthest point will block out the Sun completely. A penny will create a shadow 108 pennies long. The Earth will create a shadow 108 Earth diameters long. 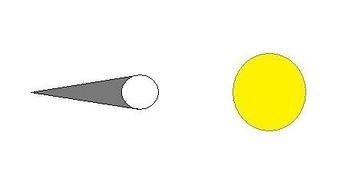 The Moon passes within that shadow during a lunar eclipse. So no matter how big or small the Moon is, it had to pass within 108 Earth diameters of the Earth. In fact, during lunar eclipses, it was observed that the Moon was imperfectly blocked by the shadow of the Earth. The shadow was roughly 2.5 times the width of the Moon..."

Starting to make sense? Click through to io9 for the whole picture.