IEEE Spectrum examines the practice of cryonically freezing the dead, with the intent to "reboot" when medical advances are prepared to undo their death.

Is it just a matter of time (cryonics scientists predict 100 years) or pure quackery? 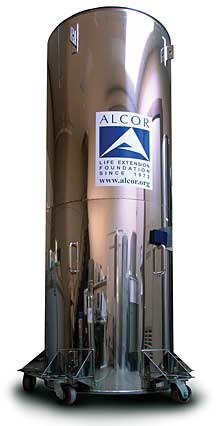 Here's how it works:

"Before the body is cooled to –196 degrees Celsius (the temperature at which liquid nitrogen becomes a gas), the person's blood is replaced by a cryoprotective solution that doesn't freeze at those temperatures. Technically, the body and cryoprotective solution are not frozen but vitrified -- that is, they solidify into a glassy substance that's free of ice crystals and the damage they can cause.

The first step in the future regeneration process would remove this vitrified liquid, letting physicians use the circulatory system as a series of tunnels through which they could run nanomedical robots, nanomaterials and a removable high-speed fiber-optic network connecting to an external supercomputer.

'It takes about 10 to the 25th bits to store the molecular structure of the brain,' says Merkle. 'The processing power to repair the brain alone might be 10 to the 37th; switching operations -- the equivalent of 100 million copies of today's fastest supercomputer running flat out for three years. With Moore's Law doubling computer power every year, we'll have that kind of computational power in a single supercomputer in about 26 years,' he adds.

'Give it another 10 years and the price will drop from $100 million to $100,000. Somewhere around 2050, that much computational power will be readily available to individuals.' And it doesn't matter if Moore's Law slows down, Merkle says: 'A person at the temperature of liquid nitrogen can literally wait centuries.'"