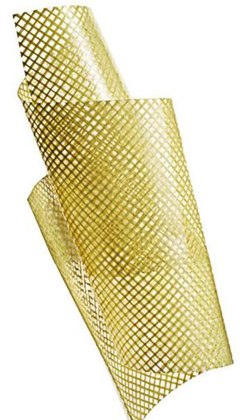 Incredible. A company called Berry Plastics (in partnership with the U.S. Army Corps of Engineers) has developed a working bomb proof wallpaper. The technology has the ability to protect against both natural disasters and warfare.

"X-Flex...is designed for use anyplace that's prone to blasts and other lethal forces, like in war or natural-disaster zones, chemical plants or airports. To keep a shelter's walls from collapsing in an explosion and to contain all the flying debris, you simply peel off the wallpaper's sticky backing, apply the rollable sheets to the inside of brick or cinder-block walls, and reinforce it with fasteners at the edges.

Two layers are strong enough to stop a blunt object, like a flying 2x4, from knocking down drywall... The wallpaper's strength and ductility is derived from a layer of Kevlar-like material sandwiched by sheets of elastic polymer wrap. The combination works so well that the Army is now considering wallpapering bases in Iraq and Afghanistan. Civilians could soon start remodeling too—Berry Plastics plans to develop a commercial version next year..."

Popsci puts it to the test: