In recent years, Russian marine biologist Alexander Semenov has built a stunningly beautiful collection of deep sea photography, capturing alien creatures only locatable in the hostile, icy depths of the far northern sea off the coast of Russia.

A brave art world denizen might surmise that the beauty of Semenov's images rivals those of the great masters—yes, Henri Matisse and Vincent Van Gogh were kings of color, and Hieronymus Bosch did invent wild creatures, but Semenov's organisms aren't fictional. Their vivid colors weren't mixed on a palette, nor were their structures designed by a human brain. They're as real as you or me. Below, Semenov shares his experience capturing his "sea aliens" deep below the cold arctic ice. 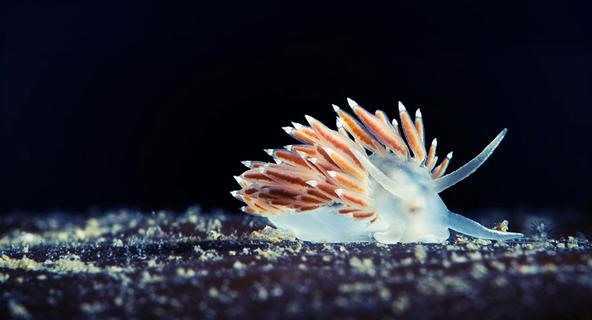 Q. What is your background?

A. In 2007, I graduated from Lomonosov's Moscow State University in the department of Zoology. I specialized in the study of invertebrate animals, with an emphasis on squid brains. Soon after, I began working at the White Sea Biological Station (WSBS) as a senior laborer. WSBS has a dive station, which is great for all sorts of underwater scientific needs, and after 4 years working there, I became chief of their diving team. I now organize all WSBS projects, and dive by myself with a great pleasure (and always with a camera).

When I first began to experiment with sea life photography, I tried shooting small invertebrates for fun with an own old camera, and without any professional lights or lenses. I found and collected the invertebrates underwater, and then shot them in the lab. After two or three months of failure after failure, I ended up with a few good pictures, which I showed to the crew. These inspired us to buy a semi-professional camera, complete with underwater housing and strobes. I then spent the next season trying to shoot the same creatures, but this time in their natural environment. It was much more difficult, and I went at it for another two months without many great results. But when you're working at something every day, you inevitably gain a lot of experience, and eventually, I began to get some interesting photos—one or two from each dive. Now I get several great shots each time I go. 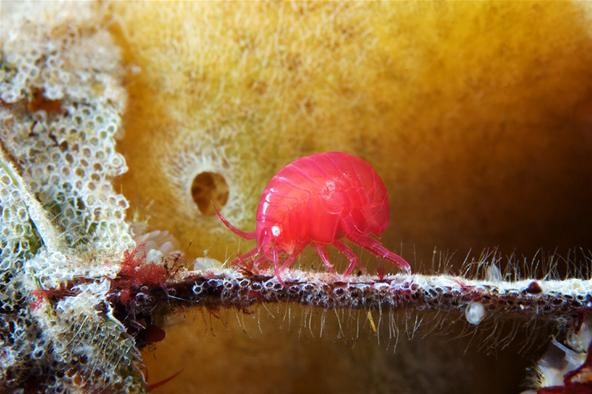 Q. What is the story behind the "Underwater Experiments" project?

A: "Underwater Experiments" is only one small part of a much larger project—my colleagues and I spent two years making a book about the flora and fauna of the White sea. It's a large, beautiful scientific book—extremely fascinating for anybody interested in learning more about the underwater world. There were more than ten underwater photographers involved, plus many scientists and specialists, each of whom wrote articles about the creatures they've specialized in most. The book is currently selling out in Russia, and we plan to publish an extended English version soon. 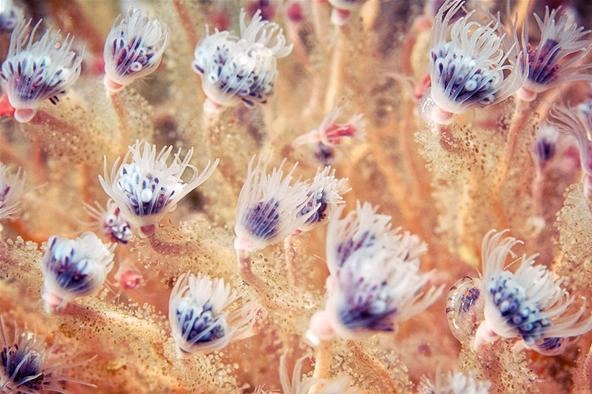 Q. Can you share any information about the creatures?

A: All of my creatures are habitants of the cold northern seas. Some of them are common species found in almost all cold seas, while others are quite rare and unique. Most of these animals have been viewed by only a few specialists, or by infrequent (and extremely brave) cold water divers. The entire area behind the polar circle is very difficult to reach, and utterly uncomfortable to dive in, so very few people brave the icy depths. 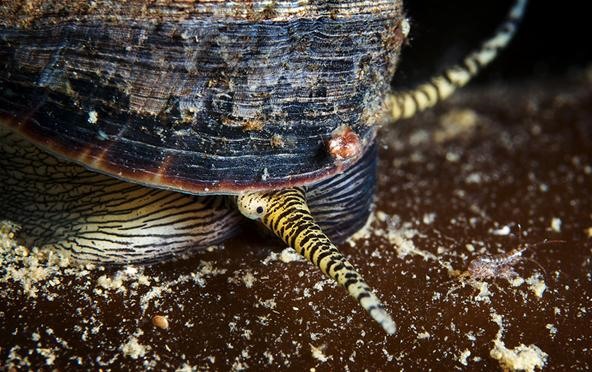 Q. Can you describe the photography process that went into capturing the creatures?

A: It's simple: Take a camera and macro lens, and encase it in an underwater housing. Connect all the cords, close it, check all edges and buttons, and check your underwater strobes. Then lug all (approximately) 8kg of your high tech photography equipment out on the boat, dive into the sea, and find your creature. Manually set up all parameters of the camera and strobes—then be sure not to move or even breath—and adjust your camera to find the right focus point (no auto-focusing, all manual). Press the shutter button, and that's it. Well, almost. There are always some environmental issues, such as currents, icy cold water (-2*C), total darkness below 20m depth, constant turbidity, and more. But you can get accustomed to it after about two or three hundreds dives. Good luck! 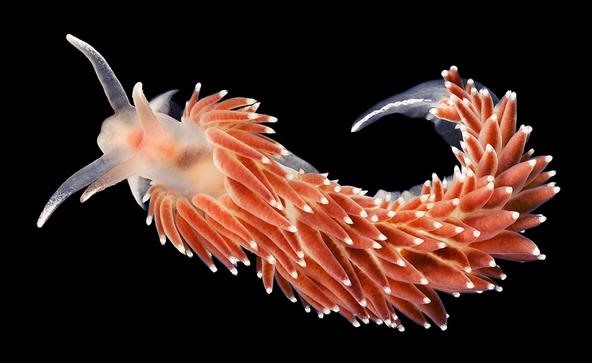 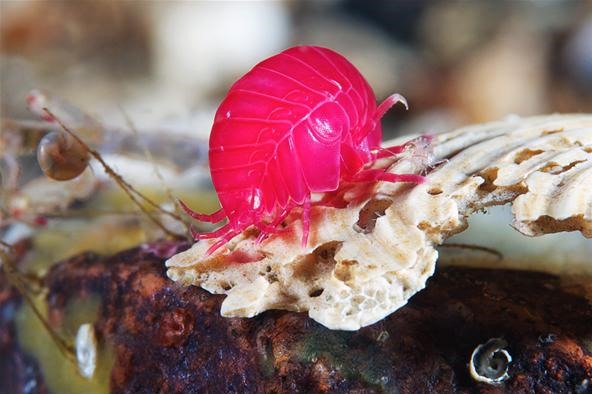 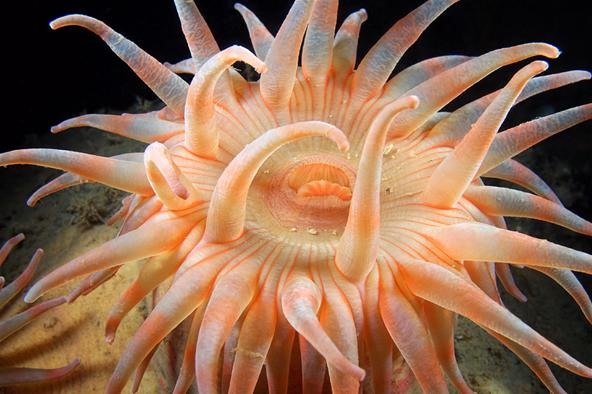 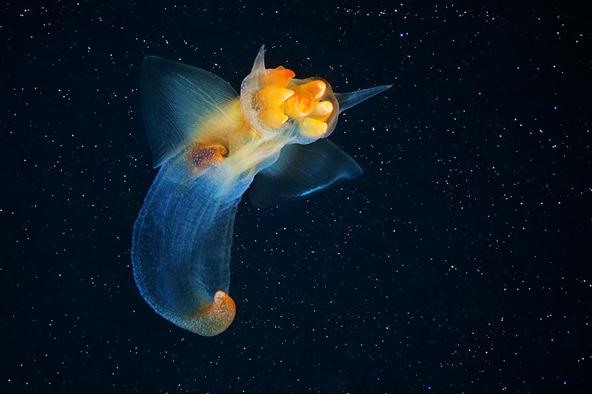 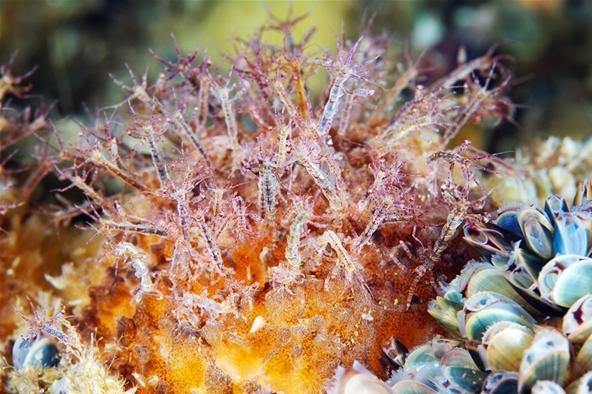 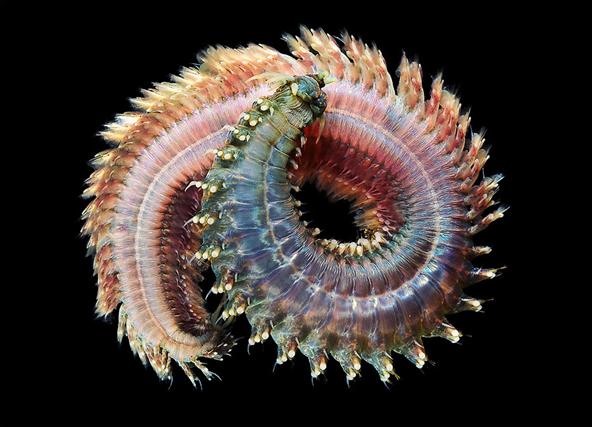 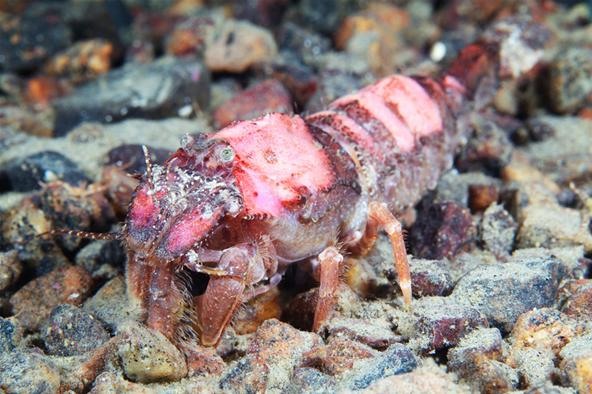 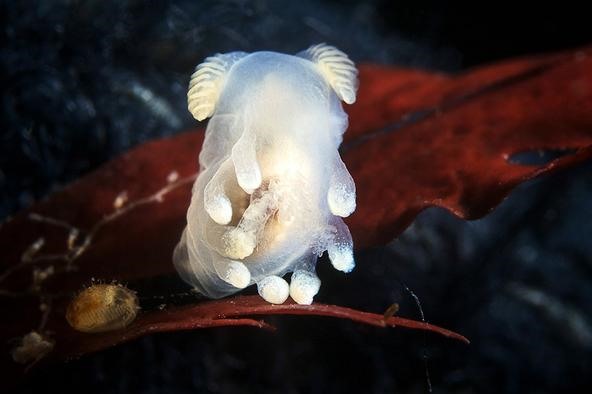 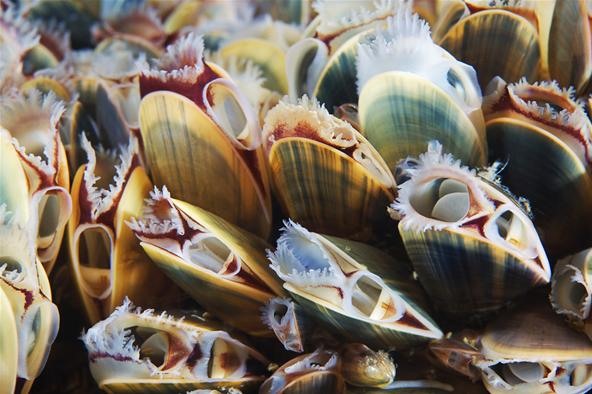 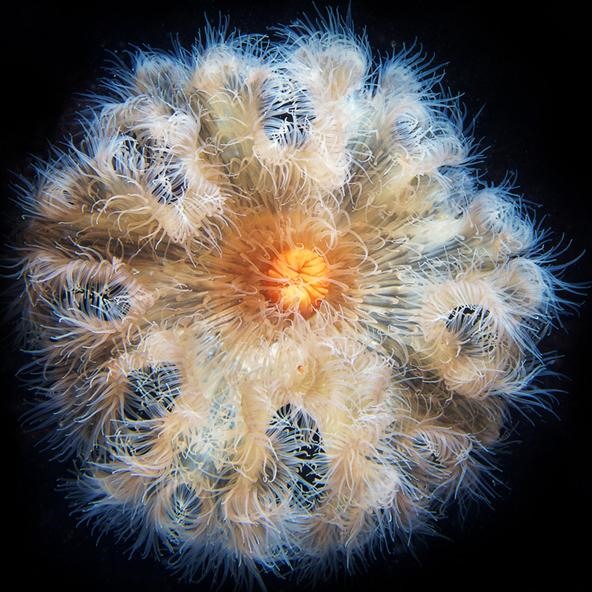 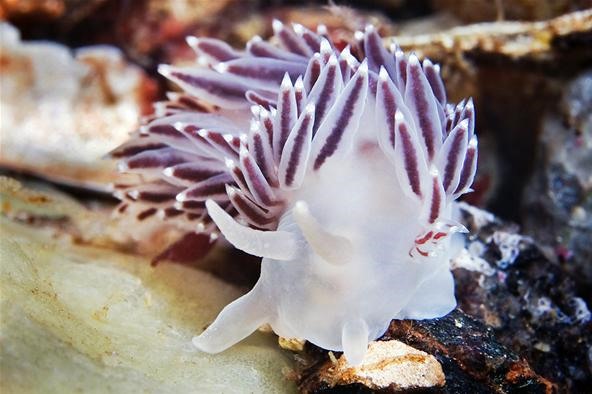 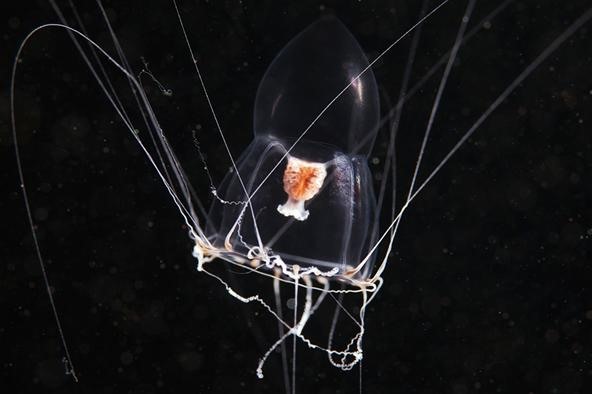 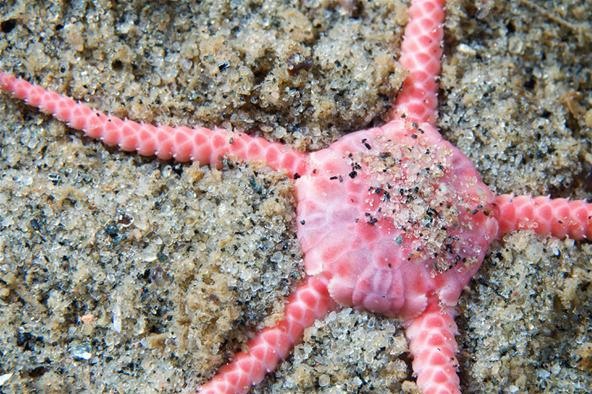 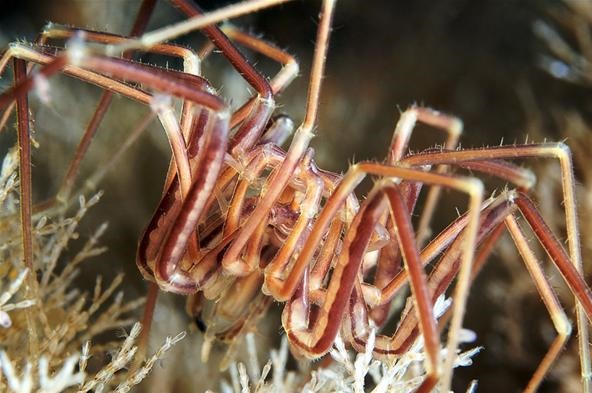 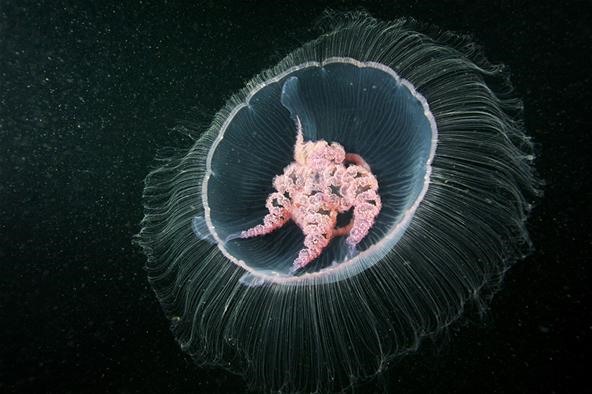 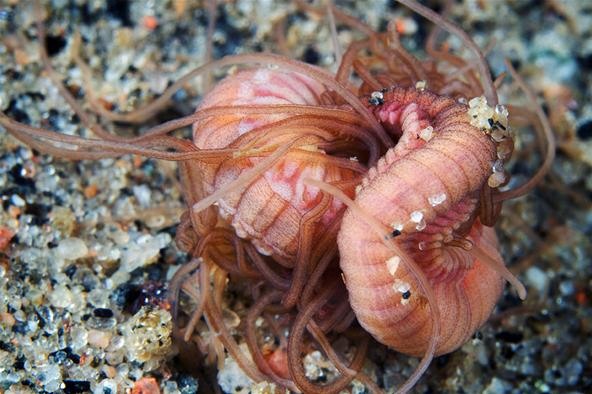 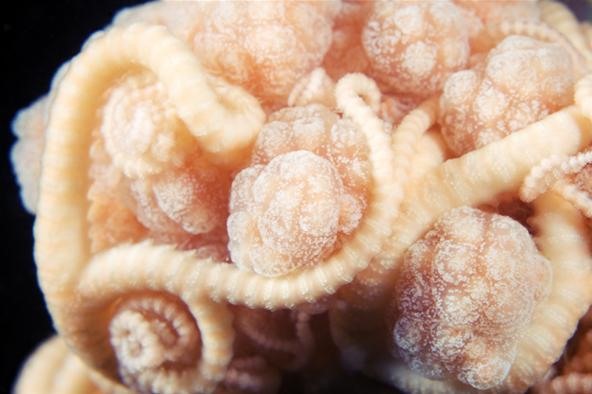 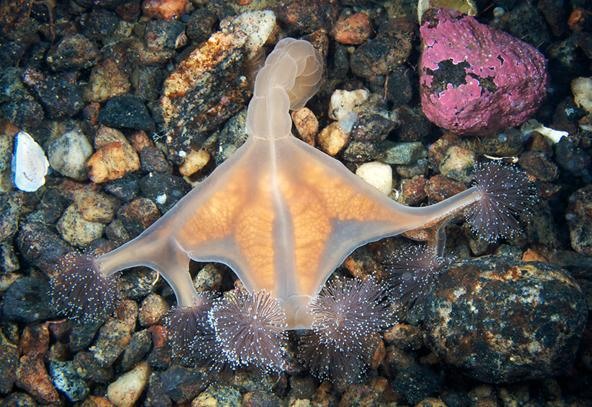 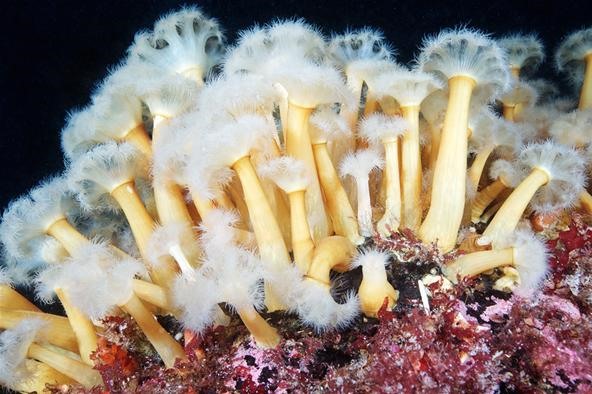 Alex. Really great photos. I have always believed that real life sea creatures are the fundamental inspiration for science fiction design. I am not sure I can prove it, but your photos are a testament to that theory. Non fiction is stranger than fiction.

Incredible. The almost orchid looking blue & orange creature looks like something out of a CG Sci-Fi movie. I'd be interested to know how deep you had to go to find these animals.

Maximum depth is 40m, but most of these creatures lives between 5 and 20m in the White sea

Awesome pictures! Do you ever dive during the winter? Or do you just shoot pictures during the warmer times? And the remote WSBS looks like a great place to work. Can't wait for the English version of the book!

We start diving in march, just because it's polar night there. It's hard to prepare dive and not safe to go underwater in constant darkness. But in march it's still winter there, a lot of snow and ice.

are any of them dangerous (poisonous sting like a jelly fish, etc.)?

Breathtaking! I cannot wait for the book!

Unbelievable Pictures,and Creatures.Congratulation for them!
May i ask your e-mail address?I would like to ask some questions :)

Miraculous photos... )) I wish I could have a job where you have to dive as well.. )) though your jib is extremely difficult, I believe it to be very interesting and challenging! )) Have you heard of any projects where help of volunteer divers is needed? Such as putting frameworks for new coral reefs for example... I really want to help somehow )) Yet I'm only an economist now...