Enjoy rolling around at night in the sleek luster of silk? Also afraid of a mobster finding out you're rolling around with his cousin's wife? Solution: bullet-proof silk sheets. All you need is the strongest biomaterial ever found--Darwin's bark spider silk. So, grab a loom and start weaving.

It may sound like a conundrum—how could anything so soft and so thin be so strong? The answer is in the threads. Scientists recently examined the biomechanical properties of silk from Darwin's bark spider and found it to be twice as tough as any previously found silk and over 10 times tougher than Kevlar. Your normal bedroom variety of silk fibers come from captivity-bred silkworms, and of course, the silk's tensile strength doesn't even come close.

Why is the Darwin's bark spider's silk so strong? The spider uses more than just charisma to trap it's prey. It makes giant webs up to 10 square feet in size, anchored to the ground by 82 feet-long threads. A gargantuan web must have extremely high flexibility and strength—it must stand up to both the thrashing of an entangled dragonfly and accidental run-ins with larger animals passing by.

The Darwin's bark spider itself is no Tiny Tim. It traps much larger prey than it's smaller-web-weaving cousins; it need larger meals to survive. Scientists found the spider in forests of Madagascar in 2008, where they found it's gigantic web draped over a river, poised to catch river insects of all varieties. At the time, the webs were the largest ever found. 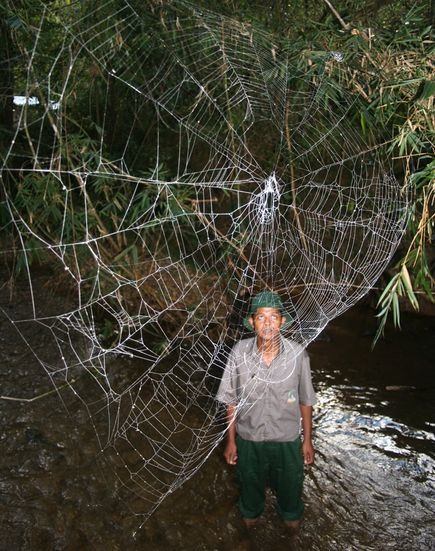 Now scientists know the Darwin's bark spider produces the toughest biomaterial ever discovered—plus it could potentially weave a fabric that would be surprisingly light weight.

So, if you wanted to have the utmost protection during your most fun moments, weave yourself some Darwin's bark spider silk sheets, and tuck yourself in tight. Who knows—maybe policemen will be wearing silk shirts in the future.

excellent article Ms.Casey Rentz, I love your articles, keep on feeding me with the desire of knowledge. thank you!