If you found the world renown Body Worlds exhibition gnarly and perverse, perhaps you'll find this latest parade of plastination a little less so—considering we don't share the same DNA as these specimens of jerky-in-the-name-of-science. The Koerperwelten der Tiere—or Animal Body Worlds–doesn't showcase preserved corporal matter, but rather 20 odd plastinated mammals, currently on display at the Cologne Zoo in Cologne, Germany. 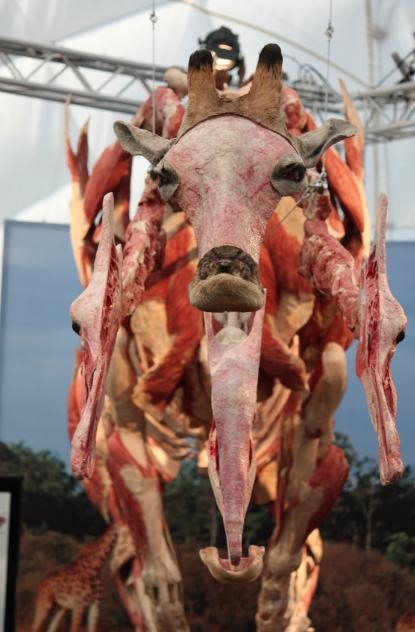 Dr. Gunther von Hagens is the mad anatomist behind both exhibitions, and inventor of the plastination technique, a process for permanently preserving whole bodies or individual parts by "extracting all bodily fluids and soluble fat from specimens, replacing them through vacuum forced impregnation with reactive resins and elastomers, and then curing them with light, heat, or certain gases, which give the specimens rigidity and permanence". The entire procedure requires 1000-1500 man-hours per specimen, resulting in non-rotting educational models.

Von Hagens developed plastination at the University of Heidelberg's Institute of Anatomy in 1977, and patented it between '77 and '82. After years of further development, he found the facilities at the University of Heidelberg insufficient, and opened the Institute for Plastination (IfP) in 1993, an establishment dedicated solely to the technique. 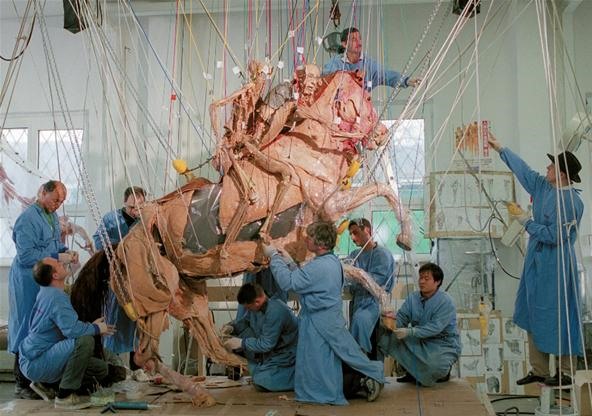 Von Hagens describes the initial genesis for his idea and life's work:

"When, as an anatomy assistant, I saw my first specimen embedded in a polymer block, I wondered why the polymer had been poured around the outside of the specimen...as having the polymer within the specimen would stabilize it from the inside out. I could not get this question out of my mind. A few weeks later, I was to prepare a series of slices of human kidneys for a research project. The usual process of embedding the kidneys in paraffin and then cutting them into thin slices seemed like too much wasted effort to me, as I only needed every fiftieth slice.

Then one day, I was in the butcher shop in the university town where I was studying, and as I watched the sales woman slice ham, it dawned on me that I ought to be using a meat slicer for cutting kidneys. And so a 'rotary blade cutter,' as I called it in the project-appropriation request, became my first Plastination investment…" 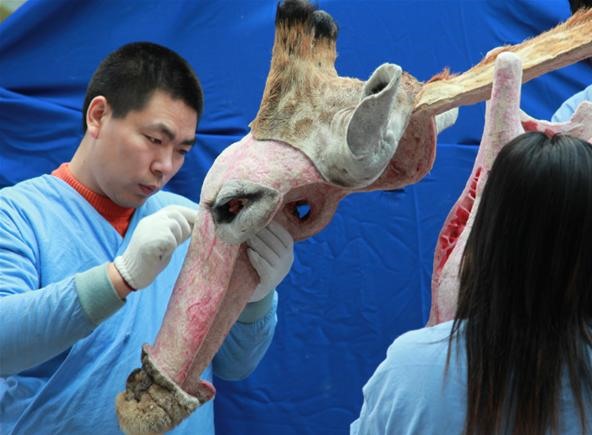 Though plastination is clearly Von Hagens' lifelong passion, the technique is not always well received, the Catholic Church being one of its biggest opposers. One of my favorite charges, documented in the Body Worlds exhibition educational brochure under "Positions of visitors and non-visitors" proudly lists—as if it were a rave review—one Gertrud Holzki of Cologne as stating:

"What tastelessness and irreverence will people come up with next to 'get rich quick'? Can they not imagine how the friends and relatives of the deceased feel? But I think that Gunther von Hagens understands nothing of 'sympathy', and 'stopping at nothing'. As can be judged by the 780,000 visitors at Mannheim, there are enough sheep everywhere to go along with him. I would advise these people and the exhibitors, if they are so curious to see dead bodies, to go into war zones."

"I just don't understand it. If I were the dean of a cathedral, I'd say: 'Go forth and marvel at the wonders of human creation!' And anyway, my exhibition is in the best Christian tradition. In the Middle Ages, the popes themselves offered their bodies for dissection. Christianity is by far the most anatomy-friendly religion."

Some of the best How To's can be fairly gruesome, so we're ecstatic to present an excitingly gruesome quasi-instructional of sorts today. Below, 5 simplified steps for the plastination process, reiterated from the Animal Body Worlds site and Wikipedia. Scroll down for more fantastic images.

Step 1: Dissect and Embalm.
Before the artistry begins, you must stop the decay. First, pump formalin into your specimen's body, via the arteries. Formalin—or more commonly known as formaldehyde—is a colorless gas with a terrible odor. It kills all bacteria and will stop nature's decay of tissue. Internationally known artist Damien Hirst has famously immersed dead animals—a shark, a sheep and a cow—in formaldehyde to preserve them.

Step 2: Remove All Body Fat and Water.
Next, using dissection tools, remove all skin and fatty tissues, so you can properly present the individual anatomical structures. Once you're finished, place your specimen in a bath of acetone. The chemical will dissolve all the remaining water left in your specimen.

Step 3: Force Impregnation in a Vacuum.
This is the most important step in the plastination technique. During the process of forced impregnation, the specimen is immersed in a bath of liquid polymer—silicone rubber, polyester or epoxy resin. A vacuum vaporizes the acetone from the proper steps, and allows the liquid polymer to fill each cell with melted liquid plastic.

Step 4: Place in Desired Position.
After vacuum impregnation, make sure your specimen's body is in the desired position. This step is complex—you will need to use wires, needles, clamps, and foam blocks to achieve the proper positioning of your anatomical structure.

Step 5: Cure (Harden).
Last but not least, cure your specimen with gas, ultraviolet light, or heat. After all, you don't want to end up with a soggy mess of matter on your hands. As previously stated, the entire 5 step process is far from quick—expect to spend approximately 1,500 working man hours. That's roughly 62 days of straight work—no sleep, no breaks! 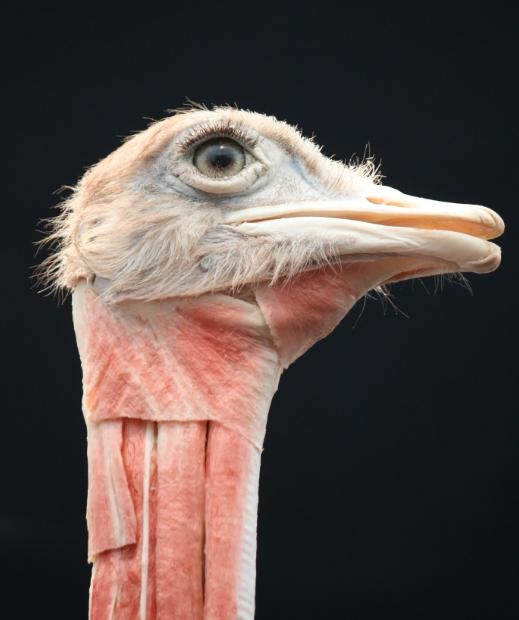 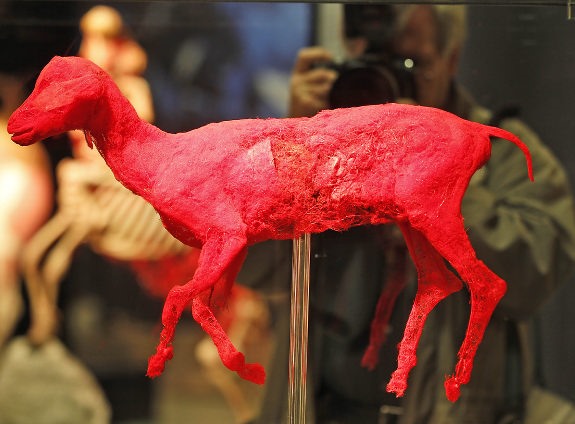 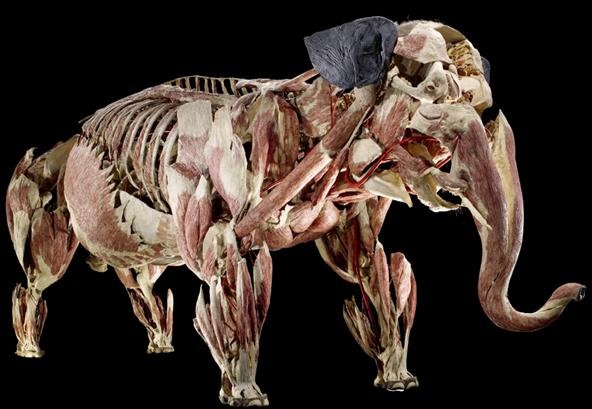 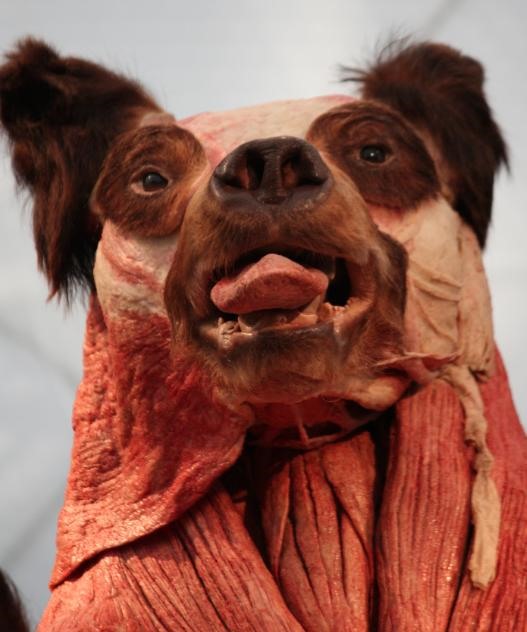 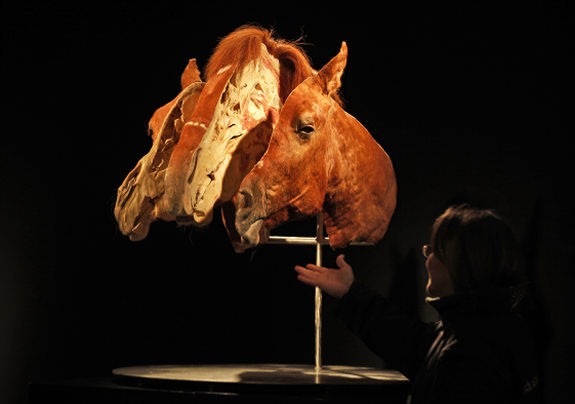 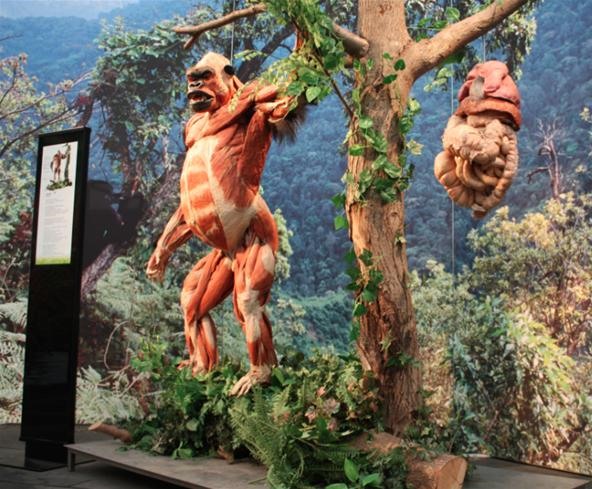 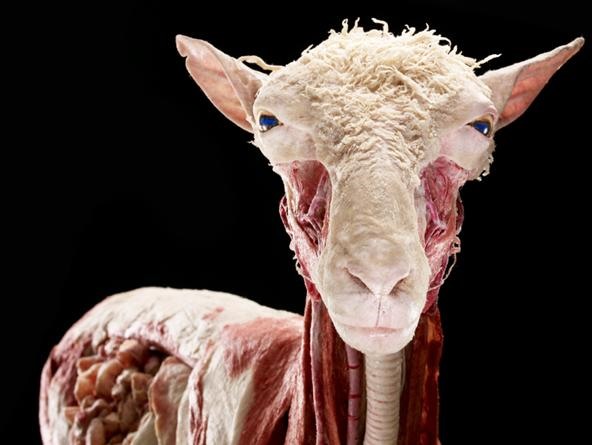 All those wires and strings to keep it together are incredible, a bit morbid, but fascinating.

yes, that image in particular is really fantastic...

The doctor is quite an innovation machine. That said, from the picture (red hat and red tie) and the words (provoking the catholic church), he must be a handful....

the one with the monkey whats that on the SIDE>>>>>>

it body reveal with animals it kinda creepy