Does size matter? When it comes to optical illusions, it does. The size of a human brain's visual cortex determines how he or she sees the world, meaning not everybody observes optical illusions in the same way.

"Our work is the first to show that the size of part of a person's brain can predict how they perceive their visual environment. Optical illusions mystify and inspire our imagination, but in truth they show us that how we see the world is not necessarily physically accurate, but rather depends a lot on our brains. Illusions such as the ones we used influence how big something looks; that is, they can trick us into believing that two identical objects have different sizes. We have shown that precisely how big something appears to you depends on the size of a brain area that is necessary for vision. How much your brain tricks you depends on how much 'real estate' your brain has put aside for visual processing."

Grab a couple friends and test the theory. Though you won't be able to screen your brain for cortex size (displayed below), the person who isn't optically tricked has more "muscle" up there (so to speak). 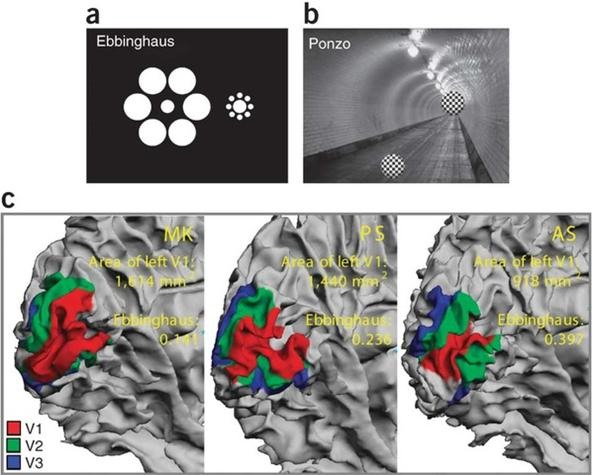 Figure (a) depicts the Ebbinghaus illusion: "The two central circles are physically identical, but appear to be different in size because of the presence of the surrounding circles."

Figure (b) depicts a variant of the Ponzo illusion: "The two checkerboard circles are physically identical, but appear to be different in size as a result of the three-dimensional context."

Figure (c) demonstrates that the smaller the cortex (V1), the stronger the illusion: "Representative maps showing cortical regions V1-V3 on a reconstructed three-dimensional mesh of the left hemisphere gray-white matter surface of three participants (denoted by initials MK, PS and AS). The surface area of the left V1 and Ebbinghaus illusion strength are given for each participant. Red indicates V1, green indicates V2 and blue indicates V3."

I measured, the inner circles in figure A are different sizes.