What would it be like to have a super-realistic humanoid modeled after you...and then come face-to-face with the moving, life-like version of yourself... Creepy? To say the least. 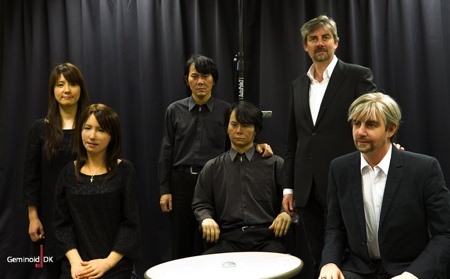 For the first time, the Geminoid family of robots and their human doppelgangers reunited at the ATR lab near Kyoto, Japan, where the idea for the robots was conceived. Geminoids are developed to operate as a person's 'telepresence avatar', meaning that they are a remotely-controlled substitute for a human being's actual presence, mimicking the operator's expressions and movements. When the humans and robots met, they took turns controlling their own avatars and then trying out each others'.

"We wanted to get together and share our experience of having robot copies," Scharfe told IEEE spectrum. "The three of us had a lot of fun doing this." As shown in the video below, the conversation among the bunch didn't make much sense, but the skin, hair, and fine movements of the Geminoids made it appear as if the group wasn't robo-human mixed company. "It's like a crazy tea party," says Scharfe.

The robots were manufactured at the Japanese firm Kokoru at the cost of approximately $200,000 each and will be shipped to their final destination soon. Scharfe's Geminoid will end up in his own lab. He plans to use the Geminoid-human reuniting event as a research tool to determine how successful the robots are at mimicking human conversation, posing the following questions: How well were each robot's expressions timed to the conversation flow? Were they believable?

If you were sunning on the beach in Maui, could your Geminoid take your meeting back at the office? Not a bad goal for the future.