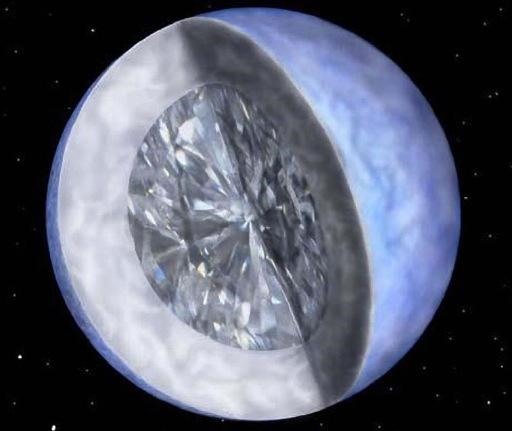 What's the story behind this huge diamond? According to BBC News,

"It's the compressed heart of an old star that was once bright like our Sun but has since faded and shrunk. Astronomers have decided to call the star "Lucy" after the Beatles song, Lucy in the Sky with Diamonds.

The diamond star completely outclasses the largest diamond on Earth, the 546-carat Golden Jubilee which was cut from a stone brought out of the Premier mine in South Africa."

One more interesting tidbit is that while this diamond planet is around the size of our moon, it carries the same mass as our sun!

The gravity must be ridiculous when considering the size.

whats the real fact about these...blurreeedd?????

Like whoa dude this would bring the price of diamonds down to the price of candy if we could reach it. Speaking of candy I would love some.

It wouldnt be worth buying anymore now would it.?

We couldn't even mine that sucker if we tried, the gravity would be immense.