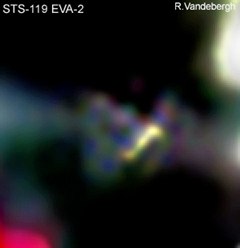 Apparently a little amateur astronomy can go a long way. On March 21, 2009, Ralf Vandebergh, sitting in his backyard, pointed his 10 inch telescope at the sky and "saw a few bright pixels appear precisely where the work was going on at exactly the moment it was being conducted."  A few bright pixels = an astronaut!

"...During EVA-2 on March 21, spacewalkers Steve Swanson and Joe Acaba were at the moment of pass over Europe working at  the Port 3 truss. It was great luck they were working on the Earth-facing side, for the deployment of the nadir UCCAS (Unpressurized Cargo Carrier Attachment System) during the pass. Exactly at the work-location, a light detail appeared in the frames taken in the best moments of seeing. Analysing carefully video recording data from the helmet cams of the spacewalkers it became clear the spacewalker located mostly Earth-faced should be Joe Acaba. To find out the point of pass over the observing location in the NASA-recordings, the point of sunset in both the recordings from the station and the observing location was a great help."

Whoa. Time to take out the backyard telescope. 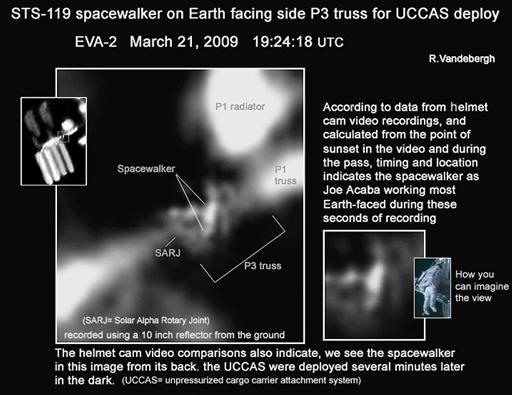