Missions to Mars are far and few between because the fuel is so costly. Solution? A pair of scientists are proposing that elderly astronauts are sent on one-way missions to Mars, to boldly go... and not come back: 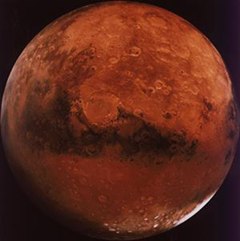 "'The main point is to get Mars exploration moving,' said Dirk Schulze-Makuch, a Washington State University professor who co-authored an article that seriously proposes what sounds like a preposterous idea.

At least one moon-walking astronaut was not impressed.

'This is premature,' Ed Mitchell of Apollo 14 wrote in an e-mail. 'We aren't ready for this yet.'

Also cool to the idea was NASA. President Barack Obama has already outlined a plan to go to Mars by the mid-2030s, but he never suggested these space travelers wouldn't come home.

'We want our people back,' NASA spokesman Michael Braukus said."

"'We want our people back,from them climbing in yo windows snatching yo people up ' NASA spokesman Michael Braukus said." is what he actually said

i don't get it

Its a reference to a popular youtube video. https://www.youtube.com/watch?v=y54yESyq6Io
Been remixed a lot.

Bed Intruder reference... Hide yo kids Hide yo Wife and Hide yo husbands cause they snatchin everybody up in herre

It's not mainly the fuel that's costly. It's the cost of designing, building and launching the vehicle that can carry all that fuel, and food, and air, and radiation shielding, ... I'd go, but you can probably guess that from my profile image :). Any other takers?