Laser gun + killing mosquitoes = lots of little boy fun, but what's it all about?

Quite possibly the most entertaining, thrilling, and well, downright life-saving presentation at this year's TED conference was Intellectual Ventures' mosquito death ray. 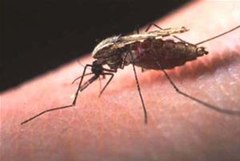 The mosquito death ray is part of a plan to totally eradicate malaria, a "disease that still afflicts some 250 million people every year and claims the lives of about one million, mostly children". That's right, apparently every 43 seconds a child dies of malaria in Africa.

What's the solution? A project led by Dr. Philip Eckhoff and funded by Bill Gates will employ technology to solve the problem. Says Intellectual Ventures, "the goal of this model, more ambitious than any similar software ever attempted before, is not just to understand and control the disease, but to stamp it out completely."

Boing Boing breaks down how it works:

"First Myhrvold showed off a container that can keep vaccination medicine cold and fresh for six months. The old way -- a styrofoam cooler with ice -- keeps the medicine cold for just four hours. The new container loses less than 1/2 watt. It's similar to a cryogenic dewar, with the same kind of insulation. But this one works like a Coke machine, vending out vials one-at-a-time so warm air never gets inside the container.

Next, Myrvold's invention company has a supercomputer they like to use for modeling. They're using it to figure out the most most effective malaria eradication technique. He showed a map of Madagascar, with every road and village, and rain and humidity information (which tells you if you have standing water for mosquitoes to breed). It displays a heat map of malaria. It waxes and wanes as seasons change from wet to dry. 'We want to eradicate malaria thousands of times in software before we do it in real life.'

Now the fun stuff: Shoot mosquitoes out of the sky with lasers. It can be built with consumer electronics -- a Blu-ray player has a blue laser, a laser printer has fast-moving mirror. You can use them around clinics. They shoot 100% organic photons. You can measure wingbeat frequency and size the of flying insect and decide whether it is worth killing..."

Check out the TED clips below or read more at Intellectual Ventures.

i would really like one of these, since i am so prone to mosquito bites.

This is awesome! I was getting sick of watching my bug zapper!

Easily the best way to use a death-ray laser.