DIY is a far-reaching term—though culturally it tends to refer to hacks, mods, crafts and constructions, its meaning can also extend to the ongoing trials and tribulations of the evolution of mankind: astonishing developments in technology, desperate acts of self-preservation or as in today's topic, discoveries in science that truly move the needle.

In a laboratory at the Institute of Physical and Chemical Research in Japan, lead researcher Professor Yoshiki Sasai and team have cultivated the world's first artificially grown eyeball, by injecting protein and chemicals into floating cells from a mouse embryo. Though the research was carried out with mouse cells, researchers say there's no reason why it shouldn't work on humans, in a method akin to Daily Mail's hypothetical infographic: 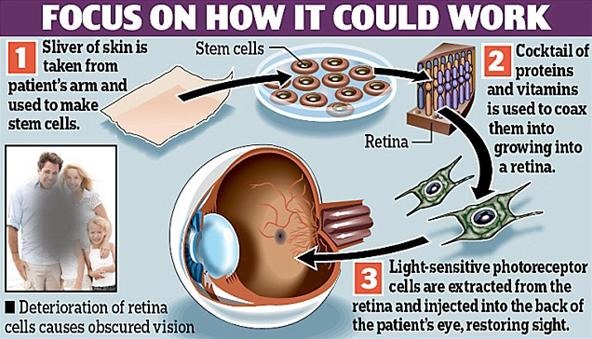 Experts believe the synthetic retina cell technology could be transferred from mice to humans in as little as five years, meaning in just ten to twenty, sight could potentially be restored to the blind.

Professor Yoshiki Sasai reports: "What we've been able to do in this study is resolve a nearly century-old problem in embryology, by showing that retinal precursors have the inherent ability to give rise to the complex structure of the optic cup."

Below, see the technology in action, as floating clusters of the mouse cells spontaneously form into an optic cup:

WTF that is so weird

This is so great if this can come true in future blind people be able to see again.