Not exactly abracadabra, but if you've taken an astronomy class, you know exactly what the umbra and penumbra are.  And any Earthling would agree that the umbra is the best place to be during a solar or lunar eclipse.

When the Sun, Earth and Moon are precisely aligned, the sky darkens in an eclipse.

There are three different types of solar eclipses; partial, total and annular.  The partial solar eclipse slightly dims the normal daytime sunlight, whereas totality completely devours it.  The annular is somewhere in-between, where the Moon, at its farthest distance from Earth, lets the rim of the Sun surround it.  Think of an eyeball, where the pupil is dilated and the iris is a thin layer around it.

No matter what solar eclipse it is, the umbra is the place to be.

The umbra is the fully shaded inner region of the shadow cast by the Moon when completely aligned (in the middle) with the Earth and Sun.  On Earth, it's a small area of land that the shadow falls on, where the total or annular eclipse can best be seen, in all its glory.

It's truly a magnificent sight.  Those in the penumbra can also enjoy the awesome astronomical event, but not its entirety.

Though a solar eclipse is a spectacular sight to see, a lunar eclipse can be just as enjoyable, if not more.

Like a solar eclipse, a lunar eclipse also happens when the Sun, Earth and Moon are precisely aligned, but this time the Earth is in the middle.  And there are no annular lunar eclipses, only partial and total. 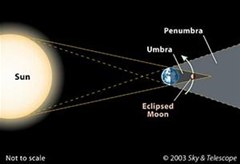 lunar eclipse, the Sun shines directly on the Earth, and the Earth casts a shadow over the moon.  When the Moon is in the umbra, the darkest part of the shadow, on Earth, the full moon is bigger and brighter than ever before.

But not everyone can see a total eclipse.

In The Friendly Guide to the Universe, Nancy Hathaway says that "Eclipses occur every year—seven at the most, two at the least.  So why don't we see more of them?  Lunar eclipses are visible only at night.  Half the time, they happen during the day and can be seen only from the other side of Earth.  Solar eclipse are even more elusive because they are visible for only a few minutes and only within the path cast by the Moon's shadow.  The path is so narrow that in all of England over the last thousand years, only five total solar eclipses* have been visible." 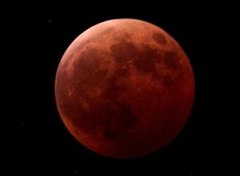 This coming total lunar eclipse will only be visible to North America and the western half of South America, and will start on December 20th at roughly 10:30PM (PST).  For those on the east, it will start on December 21st at roughly 1:30AM (EST).  At that time, Earth's shadow will appear as a dark-red bite at the edge of the lunar disk.  It takes about an hour for the "bite" to expand and swallow the entire Moon.

This five picture combination above shows various stages of a total lunar eclipse over Baghdad, Iraq, between 1:30-2:30am local time on March 4, 2007. Weather permitting, skygazers in North and Central America and a tiny sliver of South America will boast the best seats to this year's only total eclipse of the moon.

So, there aren't necessarily any instructions for watching the total lunar eclipse, except DON'T MISS IT!  Those on the west coast might find it easier to watch, but those on the east might already be in bed.

But really, it's worth a night of sleeplessness.

If you absolutely need a how-to for this event, check out eHow's How to View a Lunar Eclipse.  But really, you can enjoy it any way you like; from the comfort of your living room window, to the dampness of your own lawn, to the coldness of the nearest mountaintop— it will still be a wonderful sight.

References: SPACE.com, NPR, Wikipedia, The Friendly Guide to the Universe

* Originally states four total solar eclipses, but since the book's publish date there was one more, in 1999.

Has anyone seen it yet? Photos?

This article has pics and video links:

As for L.A.— The rain clouds squandered any chance of seeing it!